Symposium on Distributed Optimization and Resource Management over Networks

With the rapid advances in sensing, communication, and storage technologies, distributed data acquisition is now ubiquitous in many areas of engineering, biological, and social sciences. For example, the large-scale implementation of advanced metering systems in the smart grids enables real time collection of a huge amount of distributed data (voltages, phases, etc), the understanding of which is critical in improving the overall performance of the future power systems. More examples of distributed data include high-resolution videos from a network of surveillance systems, interactions on a social network, and environmental data from sensor networks. Timely and effectively processing of such large amount of distributed, and possibly corrupted and/or online data requires not only novel data processing techniques, but also a deep understanding of the underlying network properties of physical systems, including the network topology, the processing capability of each distributed node, the nature of the data, etc. These sophisticated characteristics bring new challenges for the design and analysis of optimization and resource management algorithms. This symposium aims to bring together researchers and experts in the fields of signal processing, control, optimization, network sciences, and cyber-physical systems to address the emerging challenges related to this topic. Emphasis will be given to theories and applications for distributed signal processing systems, cyber-physical systems as well as advanced distributed control and optimization techniques. 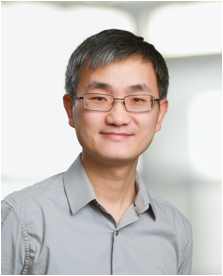 Abstract
Interference management is a key challenge for both cellular and device-to-device (D2D) communication networks, in which multiple transmitter and receiver pairs may arbitrarily interfere with each other with full frequency reuse. In this talk, we introduce a distributed spectrum sharing strategy called FPLinQ to alleviate inter-link interference by coordinating link schedule decisions throughout the network. Scheduling in the general setting is a challenging combinatorial optimization problem. In this talk, we devise a fractional programming (FP) approach to derive a reformulation whereby the integer variables are determined analytically in each iterative step. The resulting FPLinQ algorithm enables an iterative and distributed optimization of link schedule with provable convergence. The proposed strategy can be extended to include joint link scheduling and power control. The proposed strategy can further be used for interference aware uplink scheduling and beamforming in cellular networks. As compared to the existing works such as FlashLinQ, ITLinQ and ITLinQ+, a main advantage of the proposed strategy is that it does not require tuning of design parameters; it further shows significant performance advantage as compared to the benchmarks in maximizing the sum rate and the network utility.

Biography
Wei Yu (S'97-M'02-SM'08-F’14) received the B.A.Sc. degree in Computer Engineering and Mathematics from the University of Waterloo, Waterloo, Ontario, Canada in 1997 and M.S. and Ph.D. degrees in Electrical Engineering from Stanford University, Stanford, CA, in 1998 and 2002, respectively. Since 2002, he has been with the Electrical and Computer Engineering Department at the University of Toronto, Toronto, Ontario, Canada, where he is now Professor and holds a Canada Research Chair (Tier 1) in Information Theory and Wireless Communications. His main research interests include information theory, optimization, wireless communications and broadband access networks.

Prof. Wei Yu is a Fellow of IEEE and a Fellow of Canadian Academy of Engineering. He is a registered Professional Engineer in Ontario.